When you’re heartbroken, people say that one day you are going to meet someone who will show you why it didn’t work out with anybody else.

And I’m happy to say that I think I found that, at least in a way.

I’ve mentioned before that I was with someone for three months who was also in a serious relationship at the same time.

I didn’t mention how great OUR relationship was. But yeah, I admit it – it was short, but it was great. And I don’t regret it. Morality aside, it gave me something that I needed, which was a picture of what I want my relationships to look like.

I’m okay with this situation ending the way that it did as long as something good comes of it. For him I hope that this helped him to figure out what he really wants and go after that with 110% of his efforts, and have the courage to move on if it doesn’t work out. And for me I want it to be that I never forget this. So here are my favourite things that happened, so that I have a record of it on this blog that is supposed to be the story of my life.

I’ve written before about my VVS, which is one of the top issues in my relationships and has been for years, even when I didn’t know what it was. For a while I resisted bringing it up, thinking that if we weren’t actually dating then he didn’t deserve to know, but at some point I was like, “Well, if we’re really gonna do this, he’s going to find out eventually.” But I didn’t know how to talk about it, so I just sat him down at my desk and told him to read this blog post that explains the whole story. I sat on my bed in nervous silence watching him take his time reading and scrolling down the page. I was especially worried that he’d be mad that I didn’t tell him, because I’d already known him for a couple of months.

When he finished, he didn’t say anything, just came to sit beside me and put his arms around me. “I’m so sorry that happened to you. And that you’ve experienced so many difficulties because of it that you don’t even want to talk about it,” he said.

“Do you have any questions?” I asked.

“No, am I supposed to have questions?”

“How am I supposed to have questions?! All I can think about is wanting to make you feel better!”

And then I cried because that was the exact reaction I’d always hoped for but never quite gotten. While I acknowledge that it was easier for him to accept because we weren’t actually committed to each other, I still got to see that happen and I wasn’t sure if I ever would.

Another favourite memory is a bit of a weird one, and I doubt that he thinks much of it. But one night, I was bored at my parents’ house and he was procrastinating doing work and he decided to watch the first couple of episodes of a new show that I was obsessed with. He did that kind of thing a lot and I loved it; whenever I mentioned something that I was into he would look it up just to learn more and talk to me about it. This night just stands out in my mind because we stayed up until 3am both watching this show and texting each other about it (even though we were on different episodes). This was such a change from what I’m used to – everyone else I’ve been with has either openly criticized the things I like or just not taken any interest in them at all – and as a result I was so comfortable to just be myself, unedited, very early on. A few days before Christmas, two things happened – Taylor Swift’s 1989 World Tour concert movie was released, and my best friend randomly stopped talking to me. He watched the movie with me and we cuddled and had a great time and afterwards I mentioned how much I liked the live versions of some of her songs and that I wished that the studio versions were more like that.

Watching the movie was supposed to be our Christmas celebration and I wasn’t supposed to see him again until after the holidays. But then my friend bailed on our Christmas plans which I’d been really looking forward to, and to cheer me up he brought me candy. Then on Christmas Eve he made time to see me, which was amazing because honestly what I want the most on every holiday is just for someone to choose to spend time with me. Then I got an email containing a link to a Google Drive folder – inside was the audio track for every single performance from Taylor’s 1989 tour, taken from the movie, perfectly edited, and complete with all the correct metadata. He stayed up all night doing that for me just based on a throwaway comment I’d made a few days earlier. He got me the perfect thing that I didn’t even know I wanted, and I didn’t get him anything other than a card because I just assumed that was some kind of line we weren’t supposed to cross. And I still listen to them all the time. This is the single nicest thing that anyone has ever done for me. lonely and end up hating Christmas. When I asked him why he did all that he just said that he wanted to make me feel better and that he wanted to make Christmas special that year for me, because it was important to me and I don’t ever get that. It’s true, I love holidays and I get really emotional and sentimental about them, which no one seems to understand. But he got it, without me having to explain. One day I whined, “I hate holidays,” and he said, “You love holidays, you just hate the way they always seem to land.”

My ideal relationship looks like those memories, and it looks like talking all the time, making sure the other person knows that you’re thinking about them even when you’re not together, noticing little things about them that other people don’t see, finally being seen the way that you WANT to be seen, having the good parts of you that are often overlooked be acknowledged, having your body be appreciated and never criticized, doing cute things for each other, making each other feel better when needed, sending each other sexy pictures because why the hell not, having someone just stare at you for 5 minutes because you’re just that pretty, and texting you cute things in the middle of random conversations or at random times just because.

I’ve had most of those things before, but never all at the same time.

It was great and I was happy. 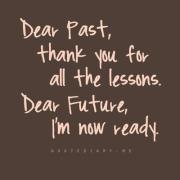 I could have been happier though, and for once I knew exactly what was missing. I knew it from the beginning. It was never going to be a committed, exclusive relationship. And I know that I need that. I already knew that. That was not the part that I needed to learn.

What I didn’t know was that I need all of that stuff too. Not just some of it. All of it.

And I believe that it’s possible, because had we met at a different time in our lives that would have happened. I have no doubt about that – a lot of people think about situations like this as being only about sex, but we were a lot more than just that. We had a good thing, it was just unsustainable.

The whole time, while I was thinking about how great everything was, I was also thinking that it wasn’t even real. Not that it was fake or that everything we were saying and doing wasn’t true, but not real in the sense that this is not the real love that is going to last. And yet, it was still so awesome. If that’s the case, then the real thing is going to be better than I can even imagine now (and I can imagine a lot).

I’m pretty sure I say this after all my relationships because I’m a sentimental asshole, and I guess that’s fair because each one has felt better than the last and I learn new things every time. But like. For real this time. I really think that the “next level” past this is It.

This + actual commitment = the formula for a successful relationship that will last longer than 3 months. The Real Thing. Maybe. One day I’m going to meet someone who can give me all that and who is at a place in their lives where they can and actually want to commit. And that person will be the right person for me.

On Christmas after I’d opened my present from him I said, “I’m not one of those people who thinks that words and labels are meaningless but they definitely don’t mean as much as actions do.” And he said, “You’re an amazing girl and I don’t want you to ever forget that. I’m sorry I can’t give you the labels you want and deserve. But know that you are unique, amazing, beautiful, and so special.” I may have been the side chick, and I have way too much love to give to just be a side chick, I know that, but he treated me better than anybody else ever has. It is so important to me that I remember what that’s like and that I deserve and am worth that, even if it means that in making an effort to remember I have to miss him more than I already would.

I’m not going to write about this again because this is a chapter in my life that has to be over, but this is my tribute to those few months. Not for anyone else – he already knows all of this – but just for me. They’re over but they were special and they were important.

**Speaking of people I used to date (?), the father of one of my oldest friends died suddenly this past week, which is why this post went up a week late. I just wanted to acknowledge that because it was really fucking sad and horrible and nobody deserves to lose a parent so young but especially not my friend who has already been through so much. R.I.P. Valentino Marchione or, as I knew him, Mike’s Dad.**

2 thoughts on “The Real Thing”