Let me preface this post by acknowledging a universal truth of life – everyone has gone through tough shit or will at some point in the future. Everyone has a story.

But when it comes to mental illness, not everyone’s “been there”. People – usually sweet, kind, well-meaning people who are just trying their best – love to say this as a response to someone’s experience with mental illness (often one that is directly correlated with an emotion that everyone really does experience at some point in time, such as depression or anxiety). I believe that when people say this, it is with the best intentions. They want to make the person they’re talking to feel less alone, and they want to believe that they understand.

They don’t realize that statements like this severely invalidate the experiences of a person with a mental illness. It’s not born out of malice; it’s born out of ignorance and the limitations that come with being human.

Whenever I use the word ‘ignorant’ people tend to get all up in arms, but the thing is, when I say that I am not calling out anyone in particular. We are all ignorant because we can only fully understand things which we have experienced. We can try to better ourselves by learning more about the world and other people’s experiences, but we can only do so much, and many people do not go out of their way to do this.

I will be the first to admit that I don’t understand what it’s like to be a “normal” person, because I have never been “normal”. I do not know the difference. I do my best every day to imagine and to be empathetic towards others, but I do not understand. I don’t know. END_OF_DOCUMENT_TOKEN_TO_BE_REPLACED

I’d like to say that it doesn’t matter how you say something, it’s what you say, and in some cases that is true, but in this case, the “what” and the “how” are equally important. The “how” might even be more important.

Here is why – imagine that you’ve written something (it can be anything, even a text message), and someone reading it says to you, “Um, excuse me, but just so you know, semicolons are actually only supposed to be used when bla bla bla bla. I mean I don’t expect most people to know that, I’m just a huge stickler for grammar and I went to school for Creative Writing.”

Did reading that kind of piss you off? Because it pissed me off just to write it. Doesn’t whoever that person is sound like a stuck up douchebag? They sound like they’re lecturing, and not because they actually care about teaching you something, but because they want to show off the ways in which they are better than you. END_OF_DOCUMENT_TOKEN_TO_BE_REPLACED

“Have you ever wondered what it’s like to overcome a paralyzing fear? Catch your reflection after facial reconstruction? Or to regain your eyesight?”

This is part of the tagline for a series debuted by The Globe and Mail, aptly titled: “What It’s Like.” In late 2015, Wency Leung, general assignment reporter for the Life section of the Globe, wrote the first story for the series, about an individual faced with relearning everything after a stroke. Since then, stories about alcoholism, PTSD and cold urticaria have been beautifully reported under head of the series. The series’ aim is to put a well deserved spotlight on individuals who live with, or have overcome, “extraordinary health experiences.”

“What it’s like … to hear voices,” is one of my favourite stories published in the series so far. Leung tells the story of 53-year-old Kevin Healey who has been experiencing the unexplained phenomenon of auditory hallucinations since the age of six. To an outside observer, his illness may seem distinctly unpleasant, fraught and disturbing; but in Healey’s story, Leung conveys the humorous side of it as well. At one point, he compares some of his voices to Captain Kirk, Spock and Sulu. Throughout, he maintains that as difficult as his condition can be, he has learned to cope with – and in a way even embrace – his illness.

“I tend to think of my voices as an amplifier of whatever I’m experiencing. I’m never without them. They’re hardly ever quiet. But if I’m in a good space and I’m not tired, and things are going well, it’s like having a bunch of friends around.”

The Globe’s new series is important for a few reasons: 1. Because once again the Globe is giving it’s loyal readership a chance to share their stories within the prime real estate of their pages; and 2. Because “What It’s Like,” allows readers the unique ability to learn new perspectives about illnesses, mental and physical, through the eyes of someone with first-hand experience.

Zakiya has her degree in journalism from Ryerson University and currently works as a freelance content writer based in Toronto. Zak is a dedicated journal-er and enjoys writing and reading fiction, particularly science fiction, in her free time. Mental illness is something that has touched her life and the lives of her loved ones, so she is supportive of anything that brings attention to and provides new perspectives about mental health.

I’m going to open this with a discussion of Internet memes, but really what I want to talk about is much more serious, as you could probably already tell from the purposefully obnoxious title that I chose for this entry. 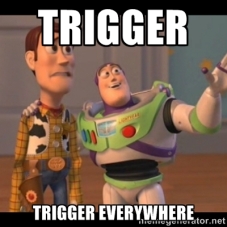 Internet memes have been a great and often positive way for the global community to bond together in a virtual space. From classics such as Rage Comics to more recent entries such as the Doge, the Internet has created a vast array of inside jokes that have allowed us all to get along with each other and share a common space.

There are times, however, when the jokes go too far.

Enter “triggered,” the latest meme to hit the web. END_OF_DOCUMENT_TOKEN_TO_BE_REPLACED

I met up with my ex last night, and the last time I saw him it didn’t exactly go well. To everyone else it seemed like I was just looking for trouble, but really I was looking for closure, and I’m glad that I went.

It reminded me that not everyone is in agreement about me. I’ve basically been talking to the same few people for the past three months and lately I have felt a little ganged up on, or like a scapegoat for anything that goes wrong ever. Or maybe just a human punching bag. Whatever it is, it’s not a nice feeling.

But he brought a completely new perspective to those same issues that others just had not considered.

I’ve written before about how I got involved with someone who has a very serious relationship, and that situation has nearly cost me some friends. Not because they’re actually involved in any way, just because the idea of it is so wrong to them and I’m supposed to be better than that and I always do the right thing and I never want to hurt anyone so how could I do a thing like this???

But my ex got it and he was the first person to do so without me having to explain. When I told him, he was surprised, but after a minute he said, “My feelings about this are so weird…because on the one hand, I’m like ‘You shouldn’t do that’, but on the other hand, I’m so proud of you.”

I immediately smiled and I realized how much I needed that. I asked why.

“Because you did something awesome! You just did something for you, and you didn’t think about anyone else for once and that’s kind of awesome.” END_OF_DOCUMENT_TOKEN_TO_BE_REPLACED